Various techniques of  rhinoplasty (cosmetic nose surgery) have been developed and introduced in different books and during different periods of time. But two techniques of open and close rhinoplasty are now accepted worldwide. In close procedure, the incisions are made inside the nose and therefore no incisions and stitches put on the skin. Incisions are created along the septum and sides of the cartilages. The advantage of this method is less swelling and absence of skin stitches, and its disadvantage is low accuracy and weakness to shape the nasal tip. In open procedure, which is also called the modern surgery, a small incision is created on the skin of the columella which extends inside the nasal nostrils. This incision is sutured at the end of the operation. Due to the thin skin of this area, incisions will fade well quickly. The disadvantage of this procedure is more swelling of the nose, and the advantages include the direct vision to the operation field during the surgery, dominance and precision in formation of the nasal tip, accuracy, and elegance of the final nasal shape.
Keep in mind that, the incisions at the edges of the nasal alar base can be used in both open and close techniques, and is not related to the rhinoplasty method.
It should be noted that, using laser in nose surgery is unreasonable and meaningless. The laser acts like a surgical knife in the operating room and is used anytime necessary, but the use of laser as a special and new technique is not mentioned in any scientific text book.
Unfortunately, those who advertise medical services and laser surgery, are trying to induce that they provide better services, which is, purely deceptive. 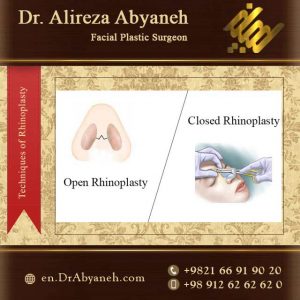